The Lesson on Bloor Street

You could have heard a pin drop. Every eye  at the conference was glued on Rick Tobias the director of Toronto's Yonge Street Mission as he shared Gabriel's story. The 6’4” Metis native grew up on a reserve in Ontario. His youth was spent exploring the great outdoors and at school he was a champion chess player. When he was a teenager, his younger brother asked him to go fishing but he declined and went hunting. Tragically his brother drowned. Blamed and traumatized, he became the black sheep of the family. This was the first of multiple tragedies that charted the course of his life.
During the Korean War he led a group of soldiers into battle and when most were killed, he was troubled with life-long guilt. Years later his wife and 12-year-old daughter died in a fire. He remarried but his second wife died of a heart attack.
Then came the final blow. Employed as a construction worker on skyscrapers his legs were accidentally bashed in and he could never work high steel again. This was the only pride he had left. Consumed by alcohol he became a skid row alcoholic on the streets of Toronto. The end came when he was beaten to death in an alley by a gang of street youth.

During the last 10 years of his life the Yonge Street Mission became Gabriel’s family and he learned to love Jesus in a passionate way. Rick described his faith as being confused and simple, and at the same time bold. On his skid row-journey he was in and out of detox centres, hands were laid on him in prayer, and demons were cast out of him, but he always returned to the booze. Rick described him as a friend and said some of the saddest moments were when he would break down and cry because Jesus didn’t take his addiction away. And then he explained that through Gabriel he learned what it is like to be trapped in poverty.
To be poor means having no keys. When you are on skid row you can only come indoors when people with keys let you in.
To be poor and homeless is to be emotionally broken. Gabriel was not a skid row alcoholic by choice. The events of his life battered, bruised, and broke him.
Gabriel taught Rick who the rich were. On one occasion Rick only had enough money to buy a piece of pizza for lunch. Walking out of the store he saw Gabriel on the street, hungry, and probably starving. He was tempted to give it to him but didn't. This made him realize that sometimes the difference between being rich and poor is a slice of pizza. And he added that to be rich in our global society is to have enough to eat.
Another lesson is the difference between true compassion and table scraps. On a cold February night, he was leaving the mission when he noticed Gabriel out in the snow with no shoes. Rick was wearing brand new boots, but he took them off and gave them to him. Initially he felt good but then realized he had only given his friend survival for another day. The boots did not give him hope, dignity or self-respect. They were only table scraps.
The director of the mission then pointed out that all the money we possess is Kingdom money and there are two choices for a person to make. The first is to accumulate more toys or help those in need. The second is to determine to what extent you are willing to give. Is it just enough for survival? Or will you give enough to help provide more than table scraps?
The next few sessions with different speakers went by in a blur. It was difficult to concentrate and when the last one ended, I left the conference with an aching heart. Visions of Gabriel embroiled in his lifelong struggle danced in my mind. Somewhat dazed I started the walk to my aunt’s condo on Bloor Street where I was staying for the week-long meetings.
And then it’s when I turned the corner onto Bloor that I saw her. A bag lady sitting on the sidewalk next to her meager possessions. Offices were closing for the day and steady streams of people briskly walked by. Intently she scanned their faces trying to make eye contact. But no one responded. Briefly ours met and I was overwhelmed. First by hopelessness. Then by helplessness knowing the only thing I could do was continue walking.
Supper that night was a feast. My aunt Lily was a gourmet cook and I often bragged I could smell her cooking from the 401. We had a pleasant visit but my mind kept drifting to Gabriel. The bag lady. Images of homeless people living on city streets. All I could do was pray for them. And this continued into the morning. Walking on Bloor back to the conference, with head tilted slightly, I was consciously praying for the homeless but was jolted into reality by a tap on the shoulder.  A street person begging for some change to buy toast and a cup of coffee.
Quickly my mind shifted into gear. This was before the advent of late-night banks and corner money machines. All I had was a 20-dollar bill and it had to last for the week. After mumbling a regrettable apology, I faded into the distance.
Fashionable stores lined the street, and it couldn’t have been more than a dozen or so steps when it happened. Something compelled me to stop, turn, and look right into a display window. It was a bookstore and lying right in the centre was a Bible opened to James chapter one. A bright red arrow was taped on the page pointing to verse twenty-two which was boxed in by red tape. Leaning over I read these words. 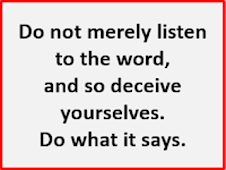 Bella Has A New Home

The True Gift of Christmas

Keith Kenemy
My life journey began in Montreal where I worked in advertising and sales and was the owner of a fashion boutique. Back in the 80's I studied to be a pastor and now enjoy retirement and writing this Blog.

The journey of life is a quest that leads to many questions. Which roads are safe and secure? What is the destination? Answers can be elusive
One purpose for this blog is to share how the Bible is a roadmap that can steer you away from potholes and dead end streets. And be your guide to a destination of lasting joy.

Another is to share life experiences from my own quest to encourage you in yours. Feedback and comments are welcome.